Topics in this article: Maintenance | See All Topics

Homeownership is typically considered a smart investment, averaging somewhere between an 8.6% and a 10% return per year. That possibility, however, depends on a variety of factors, particularly the city you live in.

Though you can’t control every factor of your home investment, you can control how well you maintain it. The dedication a homeowner brings to upkeep and maintenance can impact future investment potential as well as the amount of money they have to spend fixing broken things before being ready to sell.

We recently spoke to more than 1,000 homeowners across the country, seeking to find how well (or how poorly) these investors were working to keep their home running. They shared some of their most common negligences as well as the things they felt they truly knew how to fix. Men and women appeared to have different strengths, as did certain generations. If you’re curious to know what homeowning involves for the average person today, keep reading to find real answers from people with experience.

Could your appliances use a repair?

This part of our study dives into how often homeowners perform regular maintenance on common appliances. These regularities are also compared to how knowledgeable they are about maintenance in the first place. For the purposes of this study, maintenance also included everything from cleaning to routine checkups and fixes. 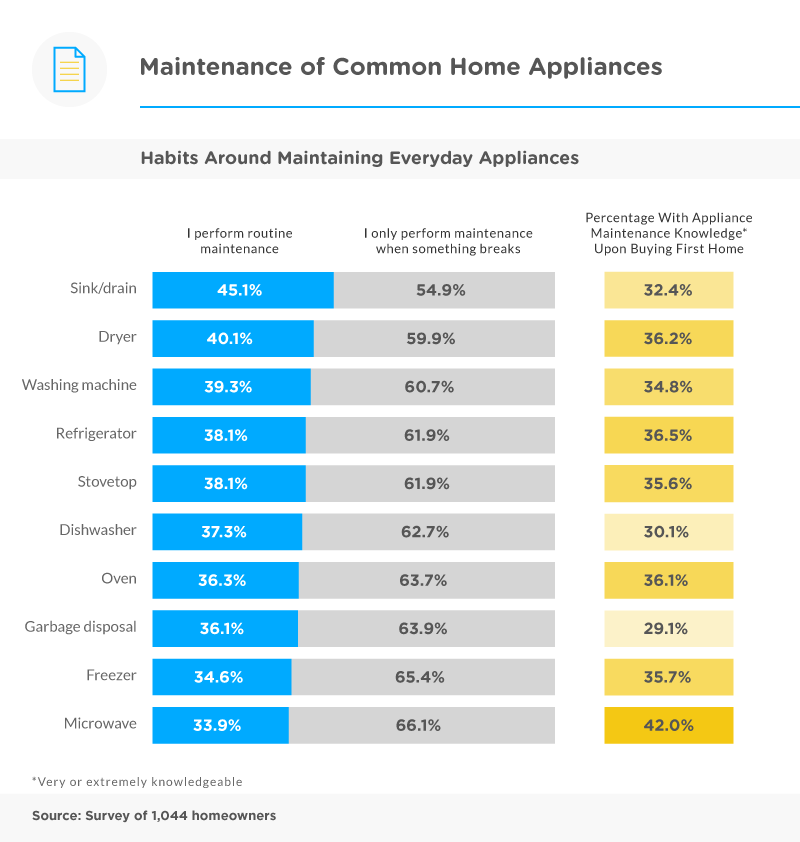 Making the jump from renting to owning a home can be a big financial adjustment, with renters often being able to look to their landlord or maintenance staff for appliance upkeep. Owning is considered more expensive than renting in all 50 states, partly because of these maintenance-related costs. Some expenses, however, may be due to a lack of upkeep.

According to the homeowners we surveyed, the most common method of maintenance was to fix something only once it was broken, no matter the appliance. Moreover, most also didn’t consider themselves to be highly knowledgeable on maintaining them when they first moved in. Sinks were the most likely appliance to receive routine maintenance (45.1%), followed by the dryer (40.1%) and the washing machine (39.3%).

Next, our study moved from everyday appliances to major home appliances – the ones that often cost the big bucks. We asked respondents to rate their level of knowledge on maintaining each of these critical pieces of equipment. 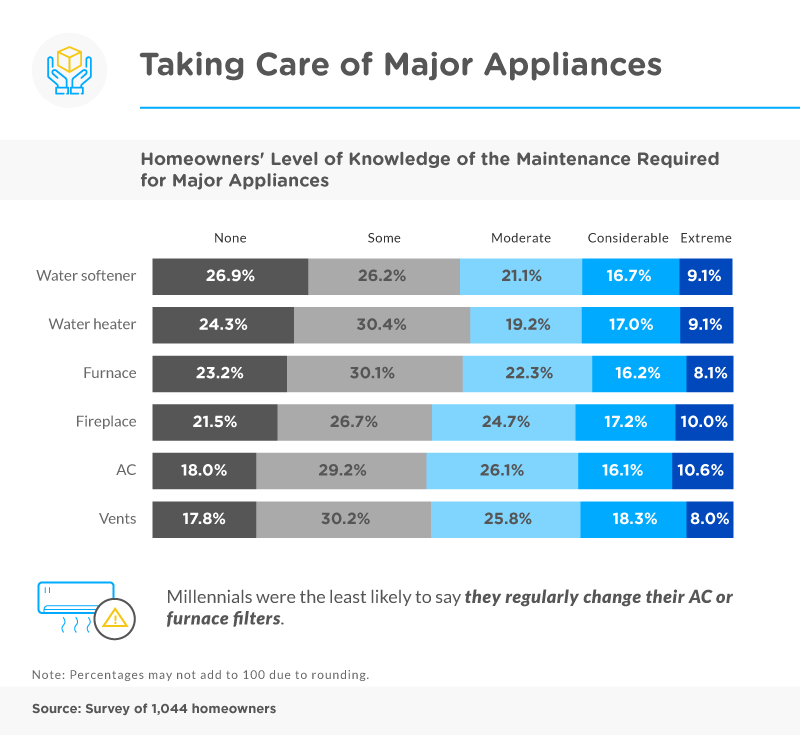 Homeowners knew the least about water softeners. In case you find yourself in that group, know that a water softener works to remove calcium and magnesium, thus preventing hard water – water with a high mineral content – from forming. Water softener malfunctions can wreak havoc on everything from your pipes to your hair and skin. Moreover, they can cost anywhere from $150 to $735 to fix, but that wasn’t close to the most expensive.

To fix something like air conditioning, homeowners should be prepared to spend anywhere from $20 to $1,900 on repairs. Part of regular maintenance includes a simple changing of filters, which millennials admitted they were the least likely to do. Only 26.7% of all respondents labeled themselves as considerably or extremely knowledgeable on the subject of AC maintenance.

No matter how diligent you are as a homeowner, appliances are bound to malfunction over time. The next part of our study looks at the most common malfunctions homeowners face today. 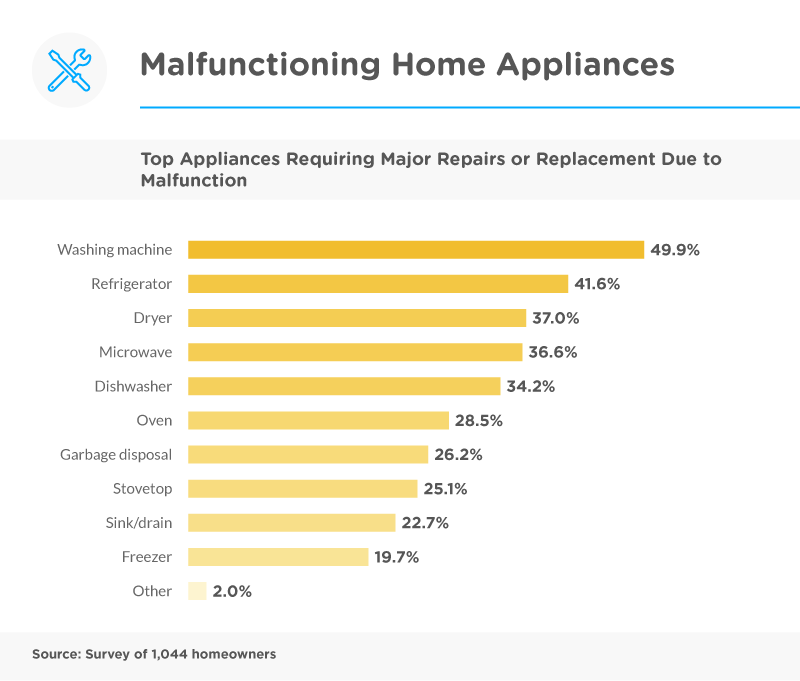 Breakdowns are fairly common. Forty-two percent of respondents experienced a broken refrigerator, which experts estimate costs the average American $1,500 for purchase plus installation.

The washing machine, however, was the leading thing to break down in the home, with 49.9% of homeowners requiring either a major repair or a complete replacement. In the event of total replacement, a bill upwards of $2,000 is possible, so it’s certainly important to maintain your washing machine and avoid that charge if at all possible.

But how exactly are people maintaining theirs? Continue reading to learn how these common malfunctions are likely happening.

Since the washing machine is breaking most commonly in the home (and costing so much to fix), we wanted to dive in and learn as much as we could about how people are maintaining these important appliances. We also took a look at dryer care as well as general laundry habits. 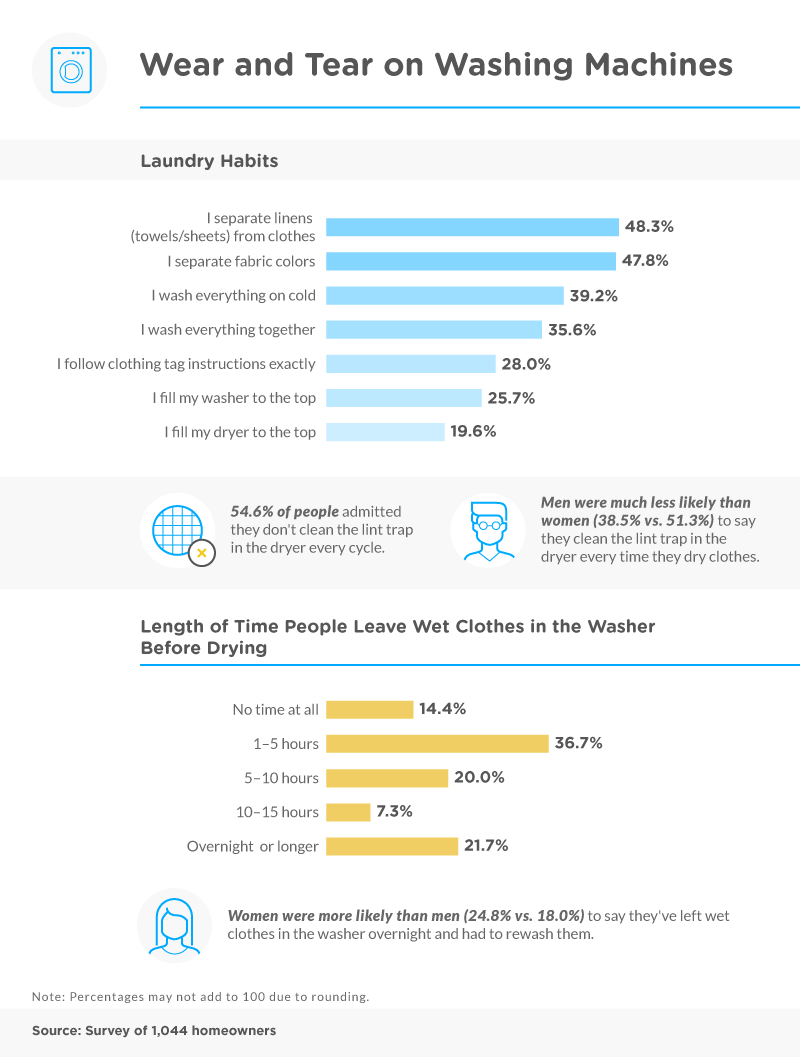 More than half of people said they didn’t empty the lint from the dryer after every cycle. Not only can this increase drying time, or result in components of your dryer failing, it can also put your entire family’s safety at risk. Lint is combustibleand is a common cause of household fires.

Fewer than half our respondents were following standard laundry protocol. Only 48.3% separate linens (e.g., towels and sheets) from their clothes, and only 47.8% separate by color. Though this is primarily damaging for the clothes themselves, it’s still a cost that you’ll want to consider. Good habits like emptying your pockets and leaving the lid open when you’ve finished the laundry can also help increase the longevity of the machine.

Men and women appeared to have different weaknesses when it came to messing up their laundry. Women were more likely than men to say they had left their wet clothes in the washer overnight and had to rewash them, while men were less likely to clean the lint in the dryer trap each time. Both cause wear, and both risk each machine’s livelihood.

Doing the Dishes and Cleaning the Kitchen

Once we saw how common bad laundry habits were, we thought we would take a closer look at the kitchen. How were homeowners approaching things like doing the dishes and maintaining their oven? 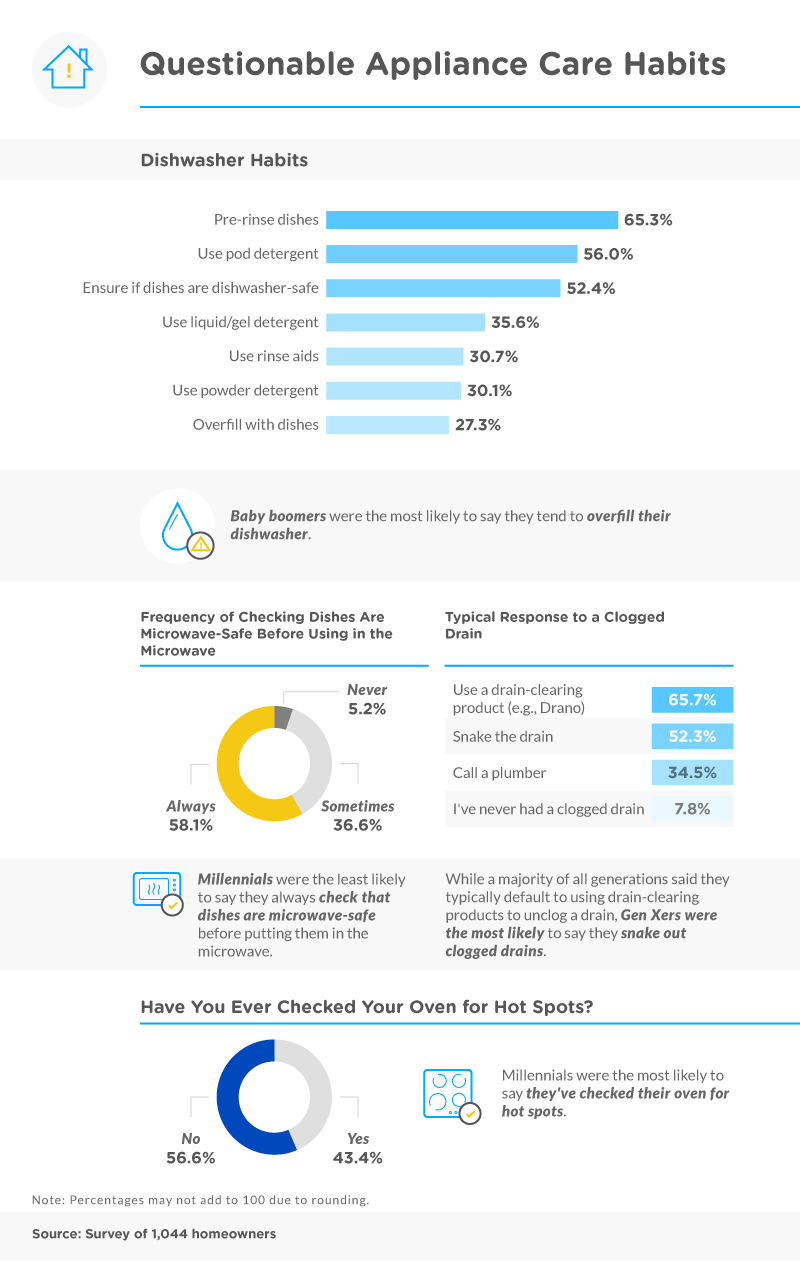 Respondents appeared less responsible in the kitchen than the laundry room. The majority (65.3%) were pre-rinsing dishes before putting them in the dishwasher, contributing to water waste, though 52.4% did admit to some responsibility by making sure to check dishes were dishwasher-safe before running them through the cycle. That said, 27.3% were overfilling their dishwasher — a common source of wear and tear — but baby boomers were the generation most likely to do so.

Where ovens were concerned, millennials actually appeared the most responsible, or at least checked their ovens for hot spots the most often. Hot spots are the areas in the ovens that actually cook the food at a higher heat than other areas. Being unaware of this can not only ruin dinner (wasting food, money, and time), but it can cause melting and leakage of food onto the oven itself. To test your hot spots, you can use a simple and inexpensive sugar trick.

Keeping Up With Your Home

Maintaining a home, as respondent data demonstrated, is no easy task. There’s actually a lot to consider even beyond the structural integrity of the house. Maintenance of everything from dishwashers to ovens and air conditioners is required to keep things running smoothly, though many of our respondents shared a general lack of knowledge about how to do so. However, no matter how responsible or knowledgeable you are, breaks are bound to happen, so don’t beat yourself up.

When you need a repair, Sears Home Services is here to help. We have experienced and trained technicians available locally, who can readily help with your next appliance repair or maintenance project. You can also ask your technician about saving with a home warranty, which covers multiple appliances and systems within your home. We know homeownership can feel like a lot, so feel free to call in the experts anytime you need.

For all questions pertaining to specific appliances, only respondents who reported having each appliance answered more detailed questions about them.

Respondents were asked to rate their knowledge of different home appliances when they first became homeowners. They were given the following scale of options:

Questions about laundry habits, dishwashing habits and appliances that have malfunctioned were asked as check-all-that-apply questions, so percentages will not equal 100%.

The data we are presenting rely on self-report. There are many issues with self-reported data. These issues include, but are not limited to, selective memory, telescoping, attribution, and exaggeration.

Fair Use Statement Homeownership often comes with a lot of new responsibilities that can be overwhelming, especially if you’ve never had to deal with a broken water heater or leaking dishwasher. If someone you know would benefit from the information in this project, you may share for any noncommercial reuse. Please link back here so the project and its methodology can be viewed in full. This also gives credit to our contributors, who make this work possible.